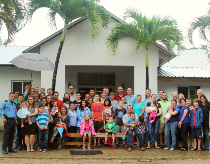 This month we’re sharing an update on the Cornerstone Foundation in Honduras. Several Skyland members went on a mission trip there in 2001. At that time, they were still building the hospital, Loma de Luz, and had a small group of missionary families ministering to the community. They shared with us their dreams of a hospital that could handle any kind of medical need, a children’s home for ill, abused or abandoned children, and a bilingual school for all children in the area.

Traveling through Central America in 1990 and 1991, Dr. Jeff and Rosanne McKenney became burdened for the spiritual and physical needs of the people in a particular place-the state of Colon on Honduras’ north coast. Ascertaining that there was no Christian organization to meet that need and with a persistent burden for people, they prayerfully decided to form an organization to address the need. Identifying with “the stone which the builders set at naught,” in September 1992 they formed the Cornerstone Foundation to provide this work, and potentially to serve similar work in areas of need in other parts of the world in the future.

Hospital Loma de Luz, which had its grand opening in January 2003, is a modern, 30,000-square-foot, full-service missions hospital. The medical services are provided by full-time missionaries serving as doctors, nurses, and physician assistants working with Honduran nurses and techs. The hospital cares for roughly 25,000 patients per year and performs about 1,200 surgical procedures per year. We serve a primary catchment area of roughly 75,000 patients and take referrals from physicians, nurses, and public health facilities from all over Honduras. Roughly 80% of our patients come from all over Honduras.

In 2004 El Camino, a Christian bilingual school, began as part of the Loma de Luz ministries. Our desire is to transform the North Coast of Honduras beginning with the next generation of leaders. Or as Victor Hugo insightfully put it, “If you would reform a man, begin with his grandmother.” We see great need in this beautiful landscape and essentially all the answers lie in the renewal and transformation of the individual heart. We see no better way to enable this transformation than to share the good news with little people who are Honduras’ future hope. Where there is violence we want to see men and women who will take a courageous stand for justice. Where there is hunger and poverty, we want to encourage men and women who will come up with solutions for the less fortunate, who will become entrepreneurs and community developers. Where there is ignorance we want to raise up men and women who will bring light to a dark world through their training and vocations, teaching in churches and schools and universities, doctors and nurses who would treat people with love and dignity, politicians who look out for the needs of their community over their own. We can think of no better way to instill this type of discipleship than through a school which provides training from primary through secondary education, preparing young people for university and further specialty training. Finally, from beginning to end our goal and our reason for reaching out through education and discipleship, is that we want to see these children come to Christ each in their own way and to come to their full potential in the gifts which God gave them.

Continuing to respond to regional needs, Loma de Luz has become more than a missions hospital, children’s home and school. It is a vital and growing integrated outreach built and administered by a diverse community of Christian believers to provide medical care, education and training, foster children’s care, agricultural work, community development and more: a constant, present, ongoing hearing of the Gospel of Jesus Christ to the people of the north coast of Honduras.

Stay up-to-date on Cornerstone at https://www.crstone.org/category/newsletter.