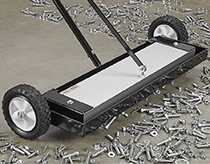 From the Pastor’s Desk

Sometimes when I am looking for inspiration God surprises me, in a good way. Recently, a parent walked in with a bunch of nails and screws they had found on the street, which is not at all surprising given the construction going on across the street. As a problem solver, I immediately thought that we needed something to pick these up before we all end up with more flat tires.

This is how we got our magnetic sweeper. This simple magnet on a stick, as I call it, picks up small metal objects as you walk along with it. As I took it out for a spin, getting all sorts of interesting looks from people walking by, I heard a clink almost right away and found a hair clip stuck to it. After my walk around the parking lot there were several sharp metal pieces on it as well. What was surprising to me was the amount of almost imperceptible metal shavings it picked up. The sweeper picked up things I couldn’t even see and that I probably would not have noticed. I didn’t have to make the sweeper attract things, it did that by its own power; if an object was metal and I brought it near the sweeper, it would pick it up. My job was just to get the sweeper close enough to the metal to attract it.

This is when it struck me: that is exactly how Jesus works. He attracts all to Himself, those we notice and even those we don’t. The magnetic sweeper had the power to pick up what was lost in the parking lot, much like Jesus has the power to pick up those who are lost all around us. Jesus, of course, is way more powerful than a magnetic sweeper. His attraction is contagious and continually draws us unto Himself.

That magnetic sweeper had drawing power, but it still required me to take it out to where the lost metal screws, nails and shavings were to do its work. In the same way Jesus has power to save the lost, yet He is continuously asking us to take Him to the lost, to help people who don’t know Him so that He can draw them all to Himself. It was a beautiful day as I walked the parking lot with the sweeper. I was so grateful that Jesus had drawn me and others to Himself in this church.

I have been out several times now. On some days I don’t pick up much, but I still enjoy the walk with the sweeper. It is a constant reminder that I am to take Jesus to the lost. My job is not to attract them, but to introduce them to Jesus who draws them in through His love.

Prayer for the Day: Lord, help me take you to those no one else sees. Amen.

← Good News of the Holy Spirit
Light of the World →